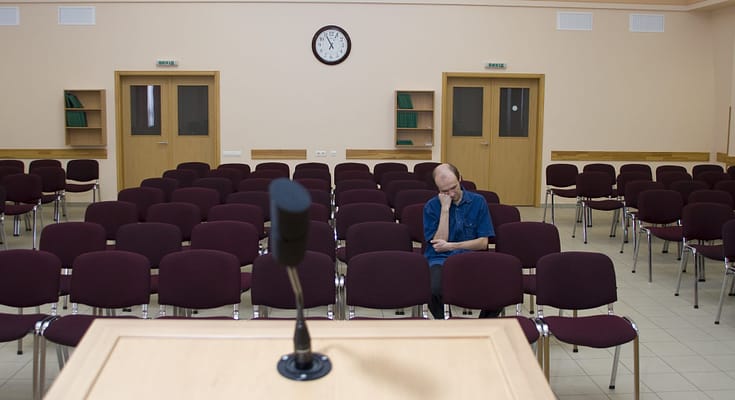 Ever stood at the front of a lecture theatre for your class and thought, ‘I wonder where everyone is?’ As you pull the microphone holder over your head and hit the record button, have you wondered whether it might be about you? Some recent research from an Australian law school suggests that you’re not imagining it. And maybe it isn’t about you. It might be more about the microphone around your neck. Recording affects lecture attendance, but they are listening.

Research published this year by six researchers at the University of Western Australia (UWA) confirms what, anecdotally, many law teachers already believed. Recorded lectures tend to encourage students to not show up. The multi-method study of undergraduate and postgraduate law students at UWA asked them directly why they don’t attend lectures. The largest proportion of students responding to the survey selected ‘The lecture is recorded’ as their first-ranked answer.

Audio recorded lectures are pretty standard. Even as an undergraduate law student, I used to collect the recording of a lecture on a cassette tape from closed reserve and listen to it. But digital recordings mean that law students can now pretty much access a recording of the audio anytime, anywhere. But the recording isn’t just the audio. It includes any visual material on the lecture theatre screen or a digital document projector.

Universities promote lecture recording to improve the accessibility of the material. And in most cases, where there is recording, it’s an ‘opt-out’ regime. In 2016, students at the University of Sydney criticised what they saw as USyd’s ‘loose’ policy on opting out of recordings. An inconsistent approach to recording was ‘failing to support students with disabilities, as well as those with work commitments and timetable clashes’.

But the response from academics at USyd was similar to the reaction from academics overseas. According to some academics, recording affects lecture attendance and encourages students to skip class.

‘… but does it really matter?’

But the researchers at UWA asked a more provocative question. Does lecture attendance really matter?  And by ‘matter’, they were referring to student success. They found that the jury was still ‘out’ on that question. Or at least they were delivering a split verdict.

On the one hand, research has found that honours students in law use lecture recordings less than other students. What’s noteworthy about that is that the school invited honours students to participate in the honours program. That is, they were academically high achievers. Researchers working with students in an economics course found that students that used only recorded lectures performed comparatively worse than their peers.

On the other hand, a more recent meta-review of research into the use of web-based learning (including recordings) has suggested that the link is much more complicated. Whether recording has an effect on performance could depend on all sorts of things. Students’ views on the usefulness of lectures, interest levels, and general academic ability can all affect whether they even listen to the recording.

They are listening … and they are still going to class

Consistent across the research is that lecture recording doesn’t mean that students are merely skipping class entirely. Students report that they use lecture recordings for a diverse range of reasons. Some do use it to replace lectures that they miss. But others use it to review material, improve their study or reinforce their understanding of the material.

The other important finding, particularly from the UWA research, is that students are still going to class. Researchers found that tutorial and seminar attendance didn’t fall away in the same way as lecture attendance. True, that might be because tutorials and seminars aren’t recorded. But focus groups of students in the same study reported that they found that their best learning happened in small groups, not lectures. Some even used the recorded lectures to prepare for tutorials.

It’s about active learning, not attendance

The UWA research also found, understandably, that where teachers assessed participation or discussed assignments, students were more likely to attend. The fact lecturers assessed attendance was more likely to encourage students to attend than not recording.  But among some of the most popular reasons for attending were also reasons like the style of delivery, the engaging nature of the material (apart from it being assessed) and who was lecturing.

Some of those reasons are consistent with the broader review of web-based learning. Interestingly, student assessment of the value of lectures was just as likely to affect whether recordings were even used.

So, to come back to something that I have written about before, student engagement is more than just bums on seats. The number of students attending lectures is not a good measure of whether they are actually learning.  More than 10 years ago, researchers at Brigham Young University noted:

The idea that students must be actively engaged in the learning process in order for it to be effective is not new. The roots for active learning reach back in the literature to John Dewey… A diverse body of educational research has shown that academic achievement is positively influenced by the amount of active participation in the
learning process.

So before you turn off the recording, your students are listening. They are also forming a view about whether it’s worth continuing to listen or even whether they might just start coming to lectures.

One Comment on “Recording affects lecture attendance, but they are listening”